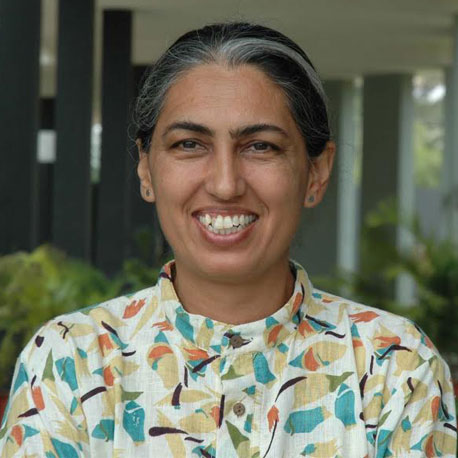 A stint at the University of Florida’s Institute on Teaching Digital Journalism turned this die-hard print-medium journalist into a believer in the web. She has since driven IIJNM’s emphasis on Multimedia. IIJNM now runs a full-fledged stream in Multimedia, and a course in Convergence; she teaches the latter.

She started life in journalism by reporting the city of Bangalore for various small newspapers. She joined the Indian Express in Delhi for a very brief period before returning to Bangalore to work for the Deccan Herald. She has, in about two decades in journalism, worked, among other newspapers, in The Gulf News, too. She has covered a gamut of topics—from crime to art profiles. As a crime reporter, she was known for digging out the unusual. Her features in the Gulf News’ weekly magazine Friday, more often than not, became cover stories.

She has taught, off and on at the Ecumenical Christian Centre’s residential programme in journalism, the Indian Institute of Management Bangalore and Mount Carmel College, Bangalore.

At IIJNM she teaches students news gathering, reporting and writing skills. She also offers an elective on Covering Arts and Culture in the second semester. She now focuses on news literacy and fact-checking and thinks there is the need to counter the blight of fake news.