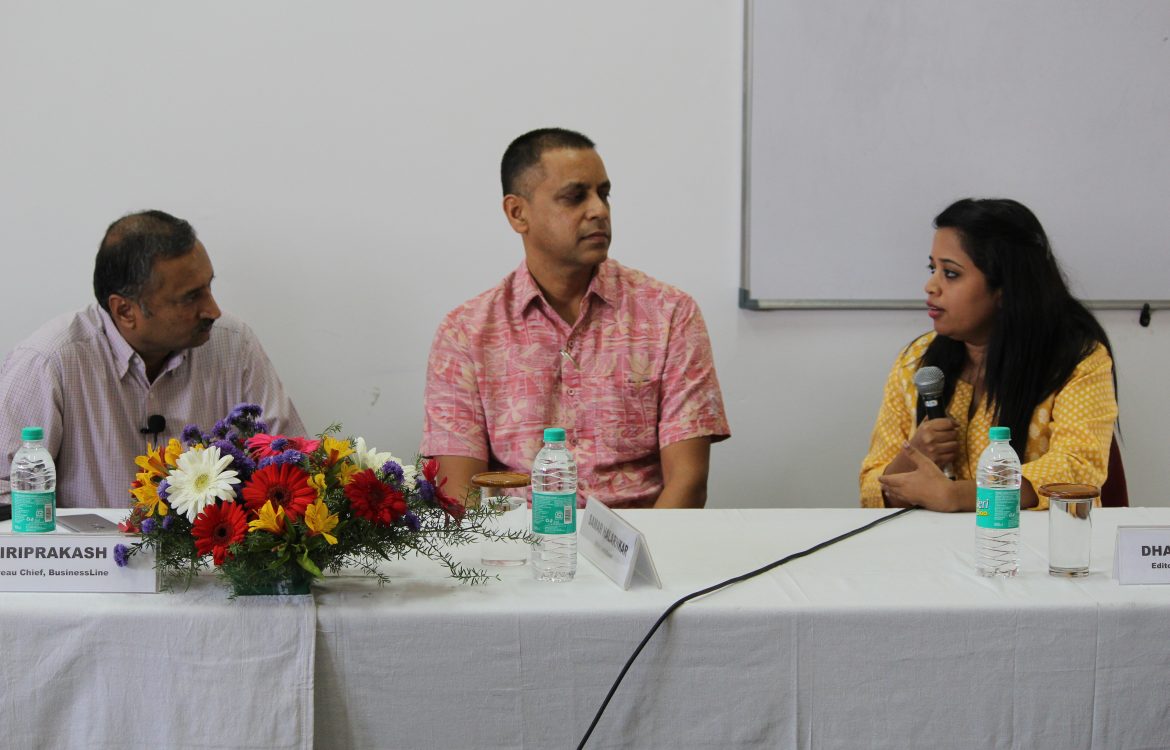 ‘​The best of times, the worst of times for media​’

BENGALURU Borrowing the opening lines of A Tale of Two Cities, Samar Halarnkar, editor at IndiaSpend, began by saying, “It is the best of times, it is the worst of times,” at a panel discussion on the changing landscape in news reporting in India, in Bengaluru on Saturday.

Titled “Independent media: Opportunities beyond the traditional newsroom”, the discussion explored issues that traditional media houses are facing at a time when organisations like Hindustan Times and The Telegraph, among others, have sacked several hundred journalists and closed down a few editions.

Halarnkar said that the recent sacking of journalists has more to do with doing away with the old guard, and getting fresh workforce on board who can adapt better to the digitisation of news reportage. “A whole lot of new jobs are also being created at the same time,” he said.

“These are exciting times to be a journalist- there are way more subjects to report on than what traditional news media allowed for,” Rajendran said, giving examples of how The News Minute has created a niche for itself “News organisations have to create a character for themselves, something that readers will come to them specifically for, like the data stories of IndiaSpend,” she added.

Speaking about long-form print reporting, Dasgupta said, “These are certainly more challenging times for print magazines to operate.” He said that the reason most Indian magazines are finding it difficult to thrive is, “the Indian reader doesn’t want to pay for content”.

“But forms of writing like long-form cannot shut down. As some portals are closing, others are starting up,” Patil said, adding that “ultimately, the story matters”. Dasgupta agreed, and said that there is no alternative to good writing, reporting, analysis and presentation.

The speakers also agreed that the independence of a media house is tested when their revenue models come into the picture. “One can depend on advertising only for so long- you hardly find three page jackets in newspapers anymore. You have to discover alternate sources of revenue,” Halarnkar said.

Addressing the fact that most of our population still has no access to the Internet and smart phones, he stressed that these hurdles wouldn’t stop the digitisation of news in India, giving the example of CG Net Swara, a voice-based online portal that allows people in the forests of central India to report and access local news through a telephone. “The complete transition from the traditional methods of news reporting will only take another five or six years.”

Moderator Giriprakash concluded the session by saying that the way for journalists to deal with this transitioning phase of the media in India is by equipping themselves with modern tools and portals of news-telling. “Good times are ahead,” he said.

Runner-up, Print: Abhishek Angad (2010-2011), for his story Six-year journey of a family in search of their missing daughters: ‘These are our kids’

Winner, Broadcast: Aswin Kanumarath (2011-2012), for his story ABHINAVBINDRA – INDIA’S ONE IN A BILLION

Winner, Multimedia: Prabhu Mallikarjunan (2010-2011), for his story The Villages at the Heart of India’s Water Dispute