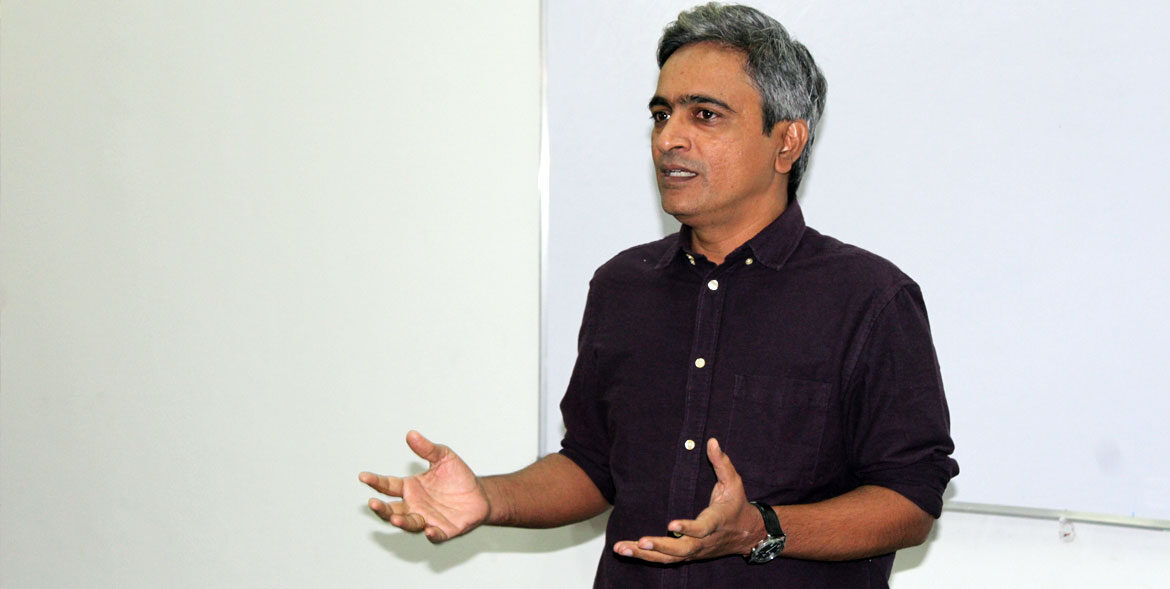 “When we say ‘documentary’ in India, people automatically think slums and underprivileged people,” said Amudhan R. P., while speaking on whether or not a filmmaker must be truthful with of his intentions with the subjects a documentary.

Award winning documentary film-maker with over a dozen movies over a three decade career to his name and a self proclaimed “political and media activist”, he was speaking to the students of IIJNM Bangalore on his newest film “My Caste” (available freely on YouTube).

While explaining his motives and inspirations to make said movie, he revealed that his decision to use visuals and audio interviews disconnected from each other in the movie was done deliberately. “Making the viewers think and imagine will make the movie a better experience and to give the audiences a sense of the place,” he said. “Sound also becomes a character.”

He said that no incident happens in isolation. “Every incident will have victims and perpetuators, while also having ‘cheerleaders’—people who not only watch from the sidelines, but also encourage the perpetuators,” he said. “I don’t want to provide people with sugar-coated reality, I like to make people uncomfortable and constantly question everything.”

Furthermore, he said that his view of filmmaking is one that involves everyone – the audience, the subjects and the filmmakers. “When we talk about women’s violence or when we talk about people in the lower socio-economic strata, we think and talk with a narrow focus.” He said. “We don’t involve men in conversations about violence against women. Likewise, we don’t involve the so-called privileged in conversations about the underprivileged.”

Advising the soon to be video journalists and filmmakers in the room, Amudhan said we shouldn’t be making false promises to our sources and subjects. “Avoid falling into that trap” he said. “Be honest about your intentions and avoid thinking yourself as their saviour.”

He also asked the students to constantly question themselves and their own motives. While relating his own experiences over the years, he talked about how earlier in his career; he used to make movies about “others”, while now he makes movies about “himself”. “How can I represent somebody else, when I don’t even know myself?” he asked. He explained, in order to better convey his message, he started to talk about his own experiences, rather than talking about victims. “In this country, we live with our castes,” he said talking about the intricacies of caste and socio-economic factors that every filmmaker must be aware of and must navigate through.

Emphasising the increasing disconnect between rural and urban India, he said the lack of rural reporting by the majority of the mainstream media was the main reason. “We get fresh produce from the supermarket, but we are unaware of the hands that worked on that produce,” he said.

Finally, he capped off the session by showcasing a couple of his experimental short videos shot entirely on a Smartphone using unconventional techniques, during the lockdown period. The videos were prime examples to prove creativity doesn’t need fancy hardware.