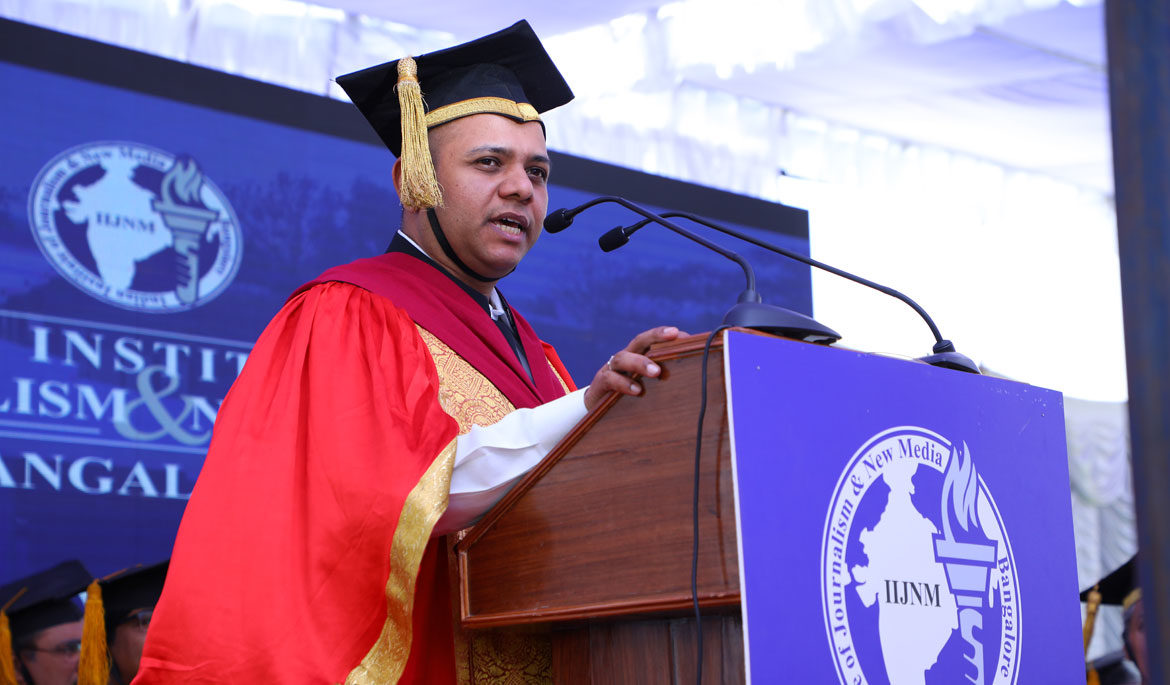 The public duty of journalism has taken place when you demonstrate your moral courage through your work, the rest is on society, its conscience,” said Dr. Vinod Jose, executive editor of Caravan magazine. “The heart and soul of a paper lie in its moral sense, its courage and integrity,” he said, reminding young graduates of the difference between good journalists and someone doing superlatively well.

Dr. Jose was speaking to the graduating class of 2018-19 at the Indian Institute of Journalism & New Media here on Saturday, May 4.

Dr. Jose quoted Joseph Pulitzer to say that a journalist—either an editor or a reporter—without moral courage has nothing. However, he said, in today’s India, for people in powerful places, journalism must be devoid of moral courage, adding that moral courage and cultivating a conscience are among the hardest things to learn or teach.

Journalism, he said, is among the most demanding professions—it requires the deepest understanding possible of a wide range of issues, it demands  quick judgments in a short span of time, and it faces wrath and repression, almost immediately from the most powerful echelons of society. Therefore, journalists should work on five areas simultaneously, so that they don’t fall into the trap of decay, being irrelevant and doing dud work—news instinct, sound judgment, moral courage, subject area expertise, and the craft itself.

All of these, he said, can be inculcated through training and education. A journalist with news instinct is not a person of commerce, but in India today, news instinct is also traded in by corporate owners.

Journalists also need to constantly push themselves to gain better knowledge in as many areas as possible, as well as strive to overcome their ignorance and prejudices. They should find sociology the most important stream of knowledge because any story idea that is interesting is related to human society, and in India ought to be related to the question of caste.  A journalist is also writing the history for tomorrow’s people, and for today’s politics. In this space, journalists are doing a far too small a role compared to what they should be doing, he said.

Sound news judgment will help the journalist decide what she thinks a story is and what it must be. This coupled with a craft that is not limited to language, that recognizes that the net and tact required to catch a sardine is different from the ones used to catch sharks, will take the journalist far.

Journalism today is in the grip of private interests pursuing commercial goals, Dr. Jose said. “The public duty of the profession is at stake,” he said, exhorting graduates to be in that world and try to be the change, thereby generating first small, and eventually big changes around you. “To stand in the middle of the muck, and not to let it taint you is the work. To stand in the muck, and attempting to clean it with the tools you have is the work that lies before you,” he said.

He warned them, however, that attempts to exercise moral courage and judgment, however, are likely to generate friction in most of the newsrooms in India today. But, he said, bear with it, don’t leave the kitchen and don’t run away from the heat, eventually, you might be part of a dream newsroom, or create that newsroom yourself.

Dr. Jose also recalled IIJNM alumni who were part of the launch team of Caravan magazine. He said, “needless to say they were very good, and are excelling in the profession now.”

Dr. Abraham George, President, IIJNM said there has never been a more important time than today for a vibrant and honest press. He said, social media and the internet are playing an important role in communicating to and among the people, but often they disseminate false news and opinions based on incorrect facts. “An honest media, especially the traditional sources of news and opinion — such as newspapers, television and online news — is therefore critical to maintaining a fair and just society,” Dr. George said.

The batch of 2018-19 graduated with flying colours with the following students receiving awards for their work through the year: